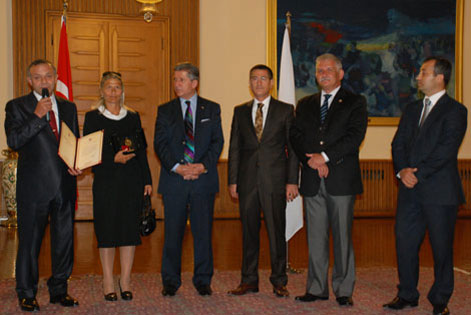 TBMM Outstanding Service Awards were given in a ceremony participated by the ministers and MPs. Öner Hekim, chairman of the board of Hekim Holding, appreciated by his charity works and services in Giresun received Outstanding Service Award from the President of the Assembly Mr. Köksal Toptan. Mr. Hekim got on the platform with AKP Group Deputy Chairman Nurettin Canikli, CHP Giresun MP Eşref Karaibrahim and his wife Perihan Hekim and stated in his thank-you speech “I have built 3 health care centers, a school and classrooms in Giresun. I have made these with my son Ömer Hekim who has passed away in 2008. I will do charity work as long as I live. I would like to thank you all.”
President of the Grand Assembly of Turkey Mr. Köksal Toptan stated that today’s ceremony is an expression of government’s and society’s respect and appreciation to the roles assumed by the esteemed philantropists and extinguished NGOs with the awareness of social responbility. Toptan said, “Our culture accepts serving to the people as a moral and virtous behaviour. Traits such as worrying for other’s troubles, helping the neighbors, protecting orphans, homeless and the poor, praising education and contributing to the social development are our basic characteristics as a nation.”
Mr. Köksal Toptan continued: “Here the lion’s share goes to our charitable and generous philantropists who volunteer to work for our nation. They have lit the torch of service with their sensitivity and love for nation and set an example to the whole society and future generations. Therefore, we are indebted to them for these services and acts they have led. On behalf of everyone, I would like to thank these people who have set an example for all of us. We are proudly giving these awards to you people who have spent parts of their wealth and income for serving our nation.”

SOME OF THE CHARITY WORK OF MR. ÖNER HEKIM